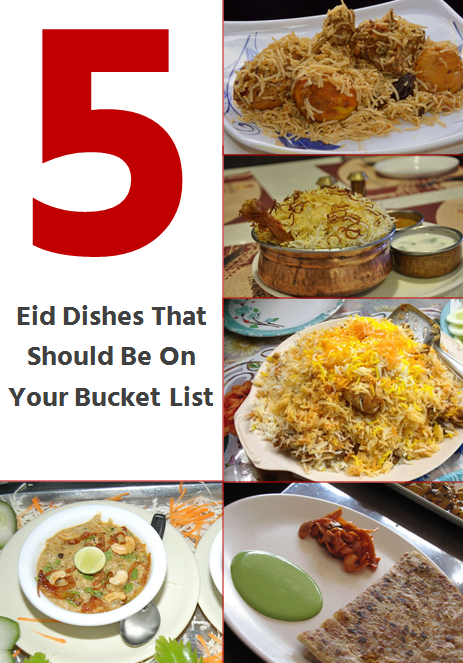 Let’s be honest about it. Some of the most memorable EID moments we have are the dishes we had that day. Whether we had them because they were cooked at home or a Dadi or Nani’s place, or simply because we landed at our friend’s place, invited or not, the aroma and the taste had all of us saying WOW or at least Subhan Allah, whether we were Muslim or not.

And the memories still linger. So, let’s not waste time and look at 5 dishes everyone should try on EID, religion, food preferences, locality, etc. notwithstanding.

A quick note for those of us not knowing which dish is had on Eid, here is the general classification. Eid-ul-Fitr dishes are sweeter, and the festival is also called Sweet Eid. Eid-ul-Adha dishes tend to be on the saltier side and the occasion is therefore called Salty Eid.

There are various types of Biryanis but Hyderabadi Biryani is supposed to top them all. And depending on where they are cooked, we agree or disagree. The dish was originally developed during the reign of Asaf Jah I, the Mughal governor of the Deccan. The meat is cooked with the Biryani itself in a Dum, usually, though many homes simply use the pressure cooker or a handi and the result is often better than what you get in restaurants.

Real Hyderabadi Biryani chefs are a class apart and can deduce whether the dish is cooked simply by waving their hand over the earthen pot and smelling the aroma. This version called Katchi Biryani is what you have to try. True connoisseurs cannot have any other Biryani than this and have it time and again many times over the year or even the week. In most homes, however, the version cooked is Pakki Biryani. For more information on these versions, click here to read more on Wiki Books. Also, most gourmands will tell you that Pakki Biryani is in reality Lucknowi or Awadhi Biryani. To an extent we agree.

Versions include those with goat meat (mutton as we call it in India), chicken or only vegetables. The Hyderabadi version is often called the most flavourful but honestly, it’s a personal choice.

Say what you will but we swear by this Biryani. The original recipe was supposed to be the brainchild of Nawab Wajid Ali Shah or at least owes its origin to him falling in love with the taste when he was exiled to Kolkata. This Biryani contains potatoes which enhance the flavour of the Biryani considerably. Did we say it’s our favourite Biryani? In case we did not, please note, it is our favourite Biryani.

The meat is cooked separately from the rice and then mixed as what happens in Lucknowi or Awadhi Biryani. The main aspect of this Biryani is that it contains lesser spices than the more famous versions. Though some may scoff at this but this lighter blend actually makes each spice stand out and also blend perfectly to create a taste that is unlike anything you would have ever tasted. Did we say it’s our favourite? Just in case you missed it the previous three times, we say it again for the fourth time, it’s our favourite.

And the best thing about it, just about anyone can make it. The more popular versions are the mutton and chicken varieties though the vegetable Biryani is also popular. Egg is usually added to the dish, something you don’t see in other Biryanis.

This is what is called the Pakki Biryani as here the meat is cooked separately from the rice and then the two are blended. The difference between this version and the Kolkata version is that there are no potatoes here.

This Biryani gained its place in culinary history from the kitchens of the Nawab of Awadh. Legend goes that a famine had struck the land and the Nawab had employed a large number of displaced farmers and workers to construct a mosque and help the people survive the lean years. The large number of people necessitated a dish that was all-in-one and easy to cook. The cooks zeroed in on a traditional army dish. The Nawab, out on inspection, caught a whiff, liked what he smelled and tasted (obviously) and ordered it to be cooked in the royal kitchen. And voila, as they say.

Surprised that we have put it here? Don’t be. This dish is tastier, cheaper and more filling than most other Eid dishes, which makes it a favourite among the hungry and perennially broke college youth. In some ways, just like Maggi, this Paratha has become the soul food of a generation of Indians studying far from home.

Made from minced goat meat, this can add the oomph to any side dish from a simple Raita to a Chicken Kofta. And the best thing is that nearly everyone can make it, from your dad or mum to the thela-wala outside college campus. This means you don’t have to travel to Hyderabad or Kolkata to have this dish.

All of us who have had this delectable Paratha with a dollop of Amul butter on top will remember it for the love it gave us, for the warmth, the happy belly, and the glorious feeling that everything is all right and beautiful in this world.

Though it is more of a Ramzan speciality (Eid-ul-Fitr that is), rather than something traditionally had during Eid-ul-Adha, we feel this dish should be as common as Dal Makhani. And if you haven’t tried out Haleem as yet, you are missing something.

In India, the dish was traditionally more popular down South (Hyderabad that is) but the globalisation of Indian cuisine has helped it become popular even in other parts of the country. One reason why it is not so popular in restaurants is the time it takes to be cooked. Traditionally, Haleem needs at least 7-8 hours of cooking time, which is a lot of LPG, making it almost impossible to make regularly. Traditional Hyderabadi Haleem is cooked for 12 hours in an earthen stove. Plus, it needs to be constantly stirred which takes a lot of manpower, something eateries catering to the middle class can hardly accommodate if they are to turn a profit.

The main ingredients are pulses or lentils if you prefer, pounded wheat and mutton and a host of spices and some more side-ingredients like ghee (duh!), milk (say what!?) and so on. Hyderabadi Haleem is so iconic that it has received the Geographical Indication status.

And that’s our list. Yes, we know it’s only 5 and we put 3 Biryanis in the list but we love each of these dishes and except for Hyderabadi and Lucknowi Biryani, none of the other three dishes is one that you are likely to find on a short bucket list of Eid delicacies. So, apologies to those of you who are lovers of Chicken Kofta, Shahi and Shammi Kababs, Firni, Shahi Tukda, and so on. We love those dishes too but these five win our list today.

So, what are you waiting for? Search and find the nearest restaurant that serves these dishes or better yet, try cooking them at home. Bon appetit.